Columbus Homes and Land for Sale

Columbus, Ohio, is quite the premier city: it’s the county seat of Franklin County, it’s the largest city in Ohio and it’s Ohio’s state capital. Plus, it’s the namesake of Christopher Columbus, the 15th-century explorer. News venues like BusinessWeek and Forbes ranked it as one of the best cities in the United States. Residents call Columbus “The Biggest Small Town in America,” which is an interesting oxymoron since it has over 850,000 citizens. This city is also unusual when it comes to passenger rail systems: it doesn’t have one. Residents don’t let this hinder them because they have other means of transportation such as buses, cars, airplanes, walking and biking. Speaking of biking, this city is a very bike-friendly area. It even has a bike-share program and two bridges reserved for cyclers and pedestrians. If you’re a bike fan, then you may have found the hometown of your dreams.

Columbus is a major hotspot for science, history and the arts. The Center of Science and Industry is a museum that combines science and research. It has interactive exhibits, a planetarium, a theater and programs for kids, teens and adults. The science center even hosts weddings in its planetarium. Are you a sports fan? This city’s rampant with sports teams, especially the Ohio State Buckeyes of Ohio State University. The team plays football at the university’s Ohio Stadium, one of the largest football stadiums in the country. Other spectator sports you can watch include hockey, motorsports, soccer, basketball, baseball, rugby and lacrosse. Columbus offers over 150 public schools for students in the kindergarten through eighth-grade levels. It also has many private schools. Besides Ohio State University, this city has one other public university and 17 private colleges.

The real estate properties in Columbus are comprised of mobile homes, single family residences, and multi-family homes. Forty-four percent of Columbus homes were built during the mid/late 20th century and have an average of two to three bedrooms. Think about purchasing your new home in this grand city. It’s affordable, plus its transportation options make it easy to live without a car. Columbus has great weather during the majority of the year as well.

If you’re searching for homes for sale in Columbus, Ohio, please contact us today.

Beautiful New Build is ready to move in. You will be greeted with a partial stone front, covered porch and oval leaded glass entry door. This home has lots of upgrades: K...

Exponentially more square footage than most duplexes in the King-Lincoln District at just under 4000 SF! KLD is a major opportunity zone with tax abatement's available! 3...

Move in ready 3 bedroom 1.5 bath condo. Hamilton Schools. Close to Amazon warehouse. The private covered patio in the back is fully fenced. Kitchen appliances and washer ...

This charming ranch bungalow located on a fenced double lot in popular South Clintonville is a must see! The warm and inviting living room has a gas log fireplace and ori...

Unique investment opportunity in west Columbus. 3 brick unit complex. each unit has 2 bedroom and full bath. One is rented for $750 per month, the other 2 unit need full ...

THIS ADORABLE CAPE COD HOME IS FULL OF UPDATES AND ONE YOU WON'T WANT TO MISS! THIS HOME OFFERS 2 BEDROOMS, 1 FULL BATH, KITCHEN, LIVING ROOM, AND A FULL BASEMENT. THERE ... 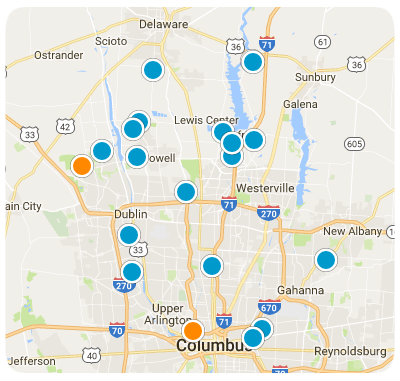